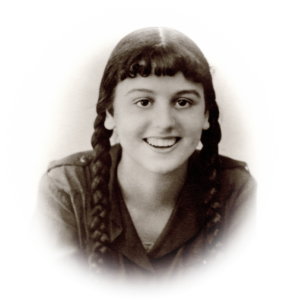 The servant of God, M. María Dolores Segarra Gestoso. was born in Melilla on March 15. 1921 in Spain.

She was the third daughter of D. Mariano, military, his wife Elisa who, formed a deeply catholic family where God was someone very dear and close. The religious calling was experienced by the servant of God from a very young age: «forever» were her words.

The natural gifts received from God, such as her joy, her gift with people and her simple affability together with a great coherence between her prayer – «being with the Lord», she would say- and her actions, led her to an uncommon charity and forgetfulness of herself which were later translated into apostolate works that she put into practice because of the deployments of her father, and in a special way in the parish of the Sacred Heart of Melilla that D. Sebastián Carrasco Jiménez ran.Faithful to this call of the Lord, and after many sufferings and misunderstandings, she placed herself under the spiritual direction of Don Sebastián, her former confessor in Melilla and then Vicar General of Malaga.

He, who had long sought to found a religious congregation to help priests in their ministry, found in Mother María Dolores the ideal person he was looking for;(even though he was twice the age of the Servant of God); and she, who carried within herself a very concrete ideal, received from Don Sebastián the necessary support to put it into practice. The Lord used both of them to found the Institute of Consecrated Life in his Church.»Missionaries of Christ the Priest» with an active and contemplative charisma: prayer, sacrifice, and apostolic activity of a priestly spirit.For the servant of God, every apostolate must be born from an intimate union with God, since it is necessary to «give Christ and him alone» and to give it, for which it is necessary “to lose oneself” in the Lord with a profound life of prayer «to comfort him in so many abandonments, to ask him for the salvation of souls, to speak to him about his priests and to pray for priestly holiness». Hence his specific vocation is based on two evangelical phrases: “Pro eis sanctifico meipsum” (Jn 17,19) and «Pray to the Lord of the harvest to send workers to his harvest» (Mt 9,37-38) who lead her to her «three great loves: Eucharist, Blessed Virgin, Holy Church».

The glory of God and the salvation of souls by the holy priest is almost a fixed idea in her. But you have to start with yourself living in the presence of God who dwells within the soul in grace. Only in this way can one be an apostle, whom he defines as a person «in love with the glory of God and the good of souls.»She was a very modern woman for her time and she was happy to live in an era in which great inventions are useful to reach souls. That is why she wanted his daughters prepared to be ready to perform the service that the Hierarchical Church asked of them, within the priestly spirit proper to the Congregation. She herself, without having reached the age of twenty (around 1940), gave talks to young people both in Catholic Action and to students, organized the Promotion of Vocations and wrote – and read – a radio script when the apostolic tasks required it, but not before a lot of prayer.The spirituality of both Founders is reflected in this phrase of the servant of God: «Our vocation is of total gift. It demands that all the acts of my day, all the prayers, all the sacrifices, in one word: EVERYTHING, seek a single goal: the glory of God in the sanctification of priests for the good of souls. «Living this vocation of a priestly spirit requires the emptying of oneself, so that it is Christ who approaches and acts in souls and not our schemes. Apostolate, for the servant of God, are the works not the words, however beautiful they are; it is to make Christ transparent through daily events. She writes: «The occasions, prosperous or adverse, that are presented to us in our lives are something like a sacrament: they bring us to God. They introduce us to his will.» For this reason, she insists that we must take advantage of all the occasions that the Lord offers us throughout the day, however insignificant they may seem to our eyes, since love is what makes them big or small.

The servant of God passed away on March 1, 1959, without having reached 38 years of age. Her Work is currently present in Spain: Las Rozas de Madrid, Granada, Cáceres, Huéscar and Lurín (Peru) developing very diverse apostolates.The Most Reverend D. Ángel Suquía Goicoechea, Cardinal Archbishop of Madrid, opened the process of canonization of the Servant of God on June 5, 1987.On September 29, 2020, His Holiness Pope Francis authorized the Congregation for the Causes of Saints to promulgate the Decree of Heroic Virtues of the Venerable Servant of God María Dolores Segarra.

On March 15, 2021, The Most Reverend D. Carlos Osoro Sierra, Cardinal Archbishop of Madrid, prayed in the crypt where her body is preserved and presided over the Thanksgiving Mass for the Centennial of her birth and for the recognition of her heroic virtues, in the Chapel of the Curia of Las Rozas (Madrid), with the assistance of the Vicar for Religious Life, the Vicar of the Vicariate VII, numerous priests, religious, teachers, parents and students of the school Santa María de Las Rozas.